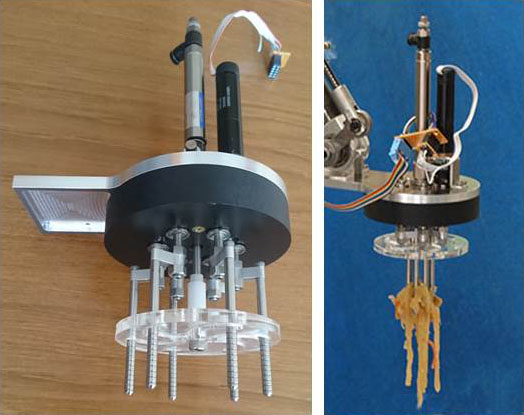 （2013-2018）The food industry is labor-intensive, and automation by robots is desired in this field. This robot hand can grasp noodles and linear prepared foods, which are difficult to grasp with a conventional two-finger gripper or vacuum suction cup, using synchronized opening and closing fingers. The amount of grasping foods can be adjusted by adjusting the finger opening angle and/or the amount of insertion into the food. The robot hand also makes prepared foods look tasty because they are placed in a conical shape when served. Sticky foods can also be squeezed off by the linearly moving disc. 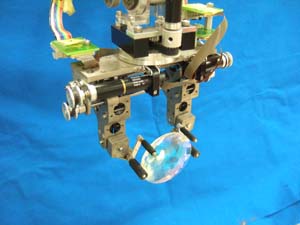 Disk-shaped lenses are frequently handled in the production of optical precision equipment such as digital cameras. In this process, the lens must be handled by holding the edge of the lens to prevent damage to the lens surface, which is currently done entirely by hand.

The Lens Hand was developed to perform the task of changing the placement and orientation of lenses in an environment coexisting with humans. It can change its posture from vertical to horizontal, and horizontal to vertical by holding only the edge of the lens. Previously, such a task is accomplished by grasping the lens with a two-finger gripper and rotating the gripper itself with the wrist to change the orientation of the lens. However, while the lens itself is lightweight, the gripper is much heavier, making it inefficient. This hand, therefore, succeeded in reducing power consumption by rotating only the fingertips that hold the lens. The rotating rollers at the fingertips allow the user to roll up and grasp the lens even when it is placed vertically.